Yuuki (佑生), formerly Nekoyashiki Uki (猫屋奏多) and You (尤) is a Japanese idol. She was a former member of BiS 1st who left the group before her official debut.

On July 13th, Yuuki was announced as a founding member of the underground idol group →EXIT←, under the name "Nekoyashiki Uki".

From March 12 to 18, Yuuki participated in the WACK AUDiTiON CAMP 2018 under the name "Gamiya Saki".

On March 18th, it was announced during the audition's concluding WACK EXHiBiTiON that Yuuki would join BiS 1st alongside Toriaez Hana and Nel Nehru.

On April 26th it was announced that Yuuki had withdrawn from BiS due for personal reasons, later citing issues with her mental and physical health. In an interview, Toriaez Hana revealed that Gamiya had actually left just two days after joining.

In early July, Yuuki opened a Twitter account under the name "You" where she announced that she had entered Miss iD 2019 and had already passed the document selection stage. She changed her name again to Yuuki that same month.

On August 27th, Yuuki featured in the music video for HAMIDASYSTEM's "Invisible Movie".

In November, it was announced that Yuuki had won Miss iD 2019's "There are more important things that matter to us than our gender" award.

Yuuki is attracted to women, as evidenced in early tweets where she talked about going on a date with a girl she likes. It is unknown if her sexuality is gay, bi/pan or another identity.

After passing the 2018 WACK Audition, she decided she couldn't continue due to anxiety, depression, and an eating disorder. 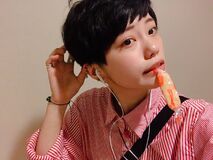 Add a photo to this gallery
Retrieved from "https://wackidol.fandom.com/wiki/Yuuki?oldid=17799"
Community content is available under CC-BY-SA unless otherwise noted.