Uruu Ru (ウルウ·ル) is a Japanese former idol. She was previously part of WACK as member of CARRY LOOSE and WAgg.

On August 14th, Uruu Ru was revealed as one of the first trainees to join WAgg.

From March 24th to 30th, Uruu Ru competed in the WACK AUDiTiON CAMP 2019 alongside other WAgg trainees. While she was one of the few WAgg members to survive the entire boot camp, she was not chosen to debut.

On June 19th, it was announced that Uruu Ru would debut in Fall as part of a newly-formed group, CARRY LOOSE.

On August 4th, Uruu Ru was added to the shuffle unit HOLY SHiTS.

Uruu Ru's final live as a member of WAgg took place on August 25th, after which she joined CARRY LOOSE full time.

On December 24th, Uruu Ru terminated her contract with WACK. 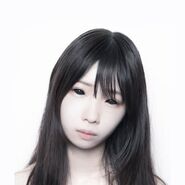 Add a photo to this gallery
Retrieved from "https://wackidol.fandom.com/wiki/Uruu_Ru?oldid=21416"
Community content is available under CC-BY-SA unless otherwise noted.