Kaedephoenix (カエデフェニックス), real name Tanigaki Kaede (谷垣楓), is a Japanese idol as part of WACK. She is a member of MAMESHiBA NO TAiGUN.

Prior to joining WACK, she was a member of iDOL STREET's trainee units, Street-sei and SAPPORO Snow♥Loveits.

In 2015 Tanigaki Kaede became an 8th generation member of street-sei, a trainee unit under the iDOL STREET label, and its subgroup, SAPPORO Snow♥Loveits. She graduated from SAPPORO Snow Loveits and street-sei on June 30th, 2016.

In early 2020, Kaede applied for the 2019 WACK audition but was rejected before reaching the boot camp stage. She auditioned for WACK again the following Summer and was selected as a participant for the reality series MONSTER IDOL. Despite remaining on the show for its entire duration, Kaede was not chosen to join MAMESHiBA NO TAiGUN in the final episode. However, at their debut live on December 25th, Watanabe Junnosuke announced that he had decided to let Kaede join the group after all.

Is currently a university student. 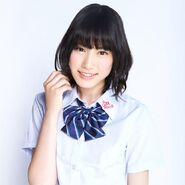 As part of SAPPORO Snow♥Loveits

As part of street-sei
Community content is available under CC-BY-SA unless otherwise noted.