Aika The Spy (アイカ・ザ・スパイ) is a Japanese idol under WACK, as a founding member of MAMESHiBA NO TAiGUN.

From November 6th, 2019, Aika appeared as a competitor on MONSTER IDOL, a segment on the comedy show, "Wednesday's Downtown".

On 18th December it was revealed in the final episode of MONSTER IDOL that she was one of the show's winners, and joined MAMESHiBA NO TAiGUN. Her debut single, Restart, was released the next day.

On January 1st, Aika extended her stage name to "Aika The Spy", in a reference to her MONSTER IDOL character arc.

Worked in a clothing store prior to joining WACK. 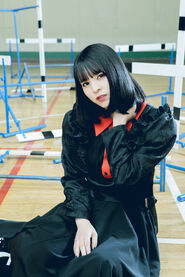 MONSTER IDOL Profile
Add a photo to this gallery
Retrieved from "https://wackidol.fandom.com/wiki/Aika_The_Spy?oldid=20583"
Community content is available under CC-BY-SA unless otherwise noted.